Faith is of no avail in absence of strength. Faith and strength, both are essential to accomplish any great work,

Sardar Vallabhbhai Patel, who is also known as the ‘Iron Man of India’ is one of the greatest Inspiration to our Organization. He was the man who United India, and gave it the present shape. 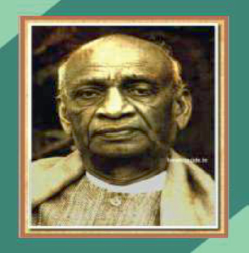 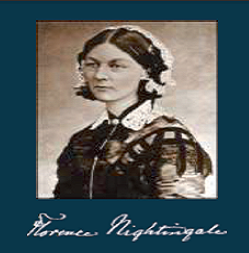 Nightingale served as a nurse during the Crimean war, tending to wounded soldiers. She was called “The Lady with the lamp” because of her habit of making rounds at night.
Florence Nightingale- “Founder of Modern Nursing”
She laid the foundation of professional nursing with the establishment of her nursing school at St. Thomas Hospital in London. It was the first secular nursing school in the world and is now part of King’s College London. The Nightingale Pledge, taken by new nurses, was named in Florence Nightingale’s Honor.

Nurses Day is celebrate around the world on Florence Nightingale’s Birthday.

Mother Teresa also known as Blessed Teresa of Calcutta, MC was an Albanian Roman Catholic religious sister and missionary. She was born in Skopje (modern Macedonia), then part of the Kosova Vilayet in the Ottoman Empire. After having lived in Macedonia for some eighteen years, she moved to Ireland and then to India, where she lived for most of her life.
Mother Teresa founded the Missionaries of Charity, a Roman Catholic religious congregation, which in 2012 consisted of over 4,500 sisters and was active in 133 countries. They run hospices and homes for people with HIV/AIDS, leprosy and tuberculosis; soup kitchens; dispensaries and mobile clinics, children’s and family counseling programmer; orphanages; and schools. Members must adhere to the vows of chastity, poverty, and
Born: 26 August 1910 obedience, as well as a fourth vow, to give “wholehearted free service to the Died: 5 September 1997 poorest of the poor”.
” The Hunger for love is much more difficult to remove than the hunger for bread.” – Mother Teresa 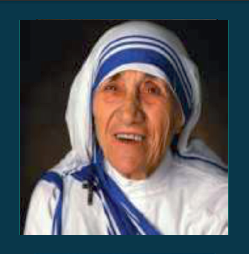